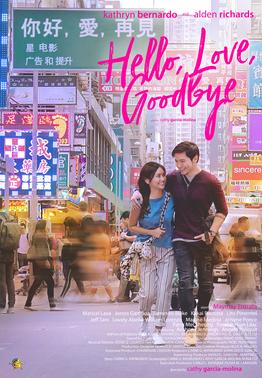 Whoever thought of pairing Alden Richards with Kathryn Bernardo in this bittersweet love story is a genius, proven by the film’s continued success in the box-office.

Relatable, realistic but light and humorous tale of the ups and downs of the lives of the OFWs in Hong Kong.

Hello, Love, Goodbye is a relatable, realistic tale of the ups and downs of Overseas Filipino Workers’ (OFWs) life in Hong Kong. A light, humorous version which does not diminish the harsh, stark reality of their ordeals, it touches on the different kinds of love: romantic love, love for family, sibling love, love for money, self-love. This post was originally planned as a Twitter thread but alas, the space does not suffice for a review of the most awaited Filipino film of the year: the pairing of Alden Richards and Kathryn Bernardo, both from rival networks, under the direction of the amazing Cathy Garcia-Molina in the movie Hello, Love, Goodye. Which is proving to be a genius business move, grossing almost Php 35 million in its opening day!  To date, it continues to rake in millions, averaging 35 million pesos a day, and showing in 450 cinemas (and counting). That does not include international show dates, of course.

I watched Hello, Love, Goodbye in a full-packed cinema at the U.P. Town Center, skipping the long line through online ticket reservation. (Really, utilising the cinemas’ online ticket reservation/purchase can enhance your movie-viewing experience. Just go to the cinemas’ website.) So, here it goes: my review of Hello, Love, Goodbye. Story: Relatable, realistic tale of the ups and downs of OFWs’ life in Hong Kong. A light, humorous version which does not diminish the harsh, stark reality of their ordeals. Touches on the diff kinds of love: romantic love, love for family, sibling love, love for money, self-love. Supporting cast: Every one of them, down to the Chinese girl with disability effectively contributed in gluing the story into one tight, coherent plot. Kathryn Bernardo: Her acting reminds me of Jaclyn Jose (another exceptionally talented Filipina actress), using only eyes, mouth and tremor/tone of voice to express a multitude of emotions instead of the usual ear-splitting screams and hair-pulling antics we see in Fil movies. Kathryn is very convincing as a hard-pressed, overworked domestic helper torn between family responsibility and chasing her own dreams, and a strong woman whose mind rules over her heart. Alden Richards: His acting is hypnotizing and compelling. He made me want to wring his neck, laugh with him, laugh AT him, pity him, cry with him, admire him – all in a span of almost 2 hours. He’ll make you feel the character and the emotions he’d internalized for his role without you knowing it. I bet if the role calls for it, he can make viewers worship him to the heavens or curse him to hell. He’s made for the big screen, not just TV. A movie of the same, if not, of a higher calibre should be his follow-up project, not a TV series. Or he can make them both at the same time. Direction: Direk Cathy is truly a master in bringing out the main characters of Ethan and Joy–flaws and all– from Alden and Kathryn. There were no traces of any conscious effort to act them out: they became Ethan and Joy. The director ingrained them so much in the two main leads that these characters came alive to make us smile, swoon, cry, and hope. I loved that the director made them exhibit tempered, polished acting, rendering the film more powerful and loud with all its meanings and lessons without being overly dramatic. Cinematography: The panoramic views of Hong Kong landscape and its inner streets and infrastractures were awesome. However, (and this is for all Filipino films, not just HLG), I wish we could learn from American and foreign cinematography, when the timing to zoom in on an actor’s face is done at the correct, exact time and scene.  For example, that confrontation scene in Ethan’s apartment would have been more powerful if the cameras focused more on their faces, instead of their profiles or from a certain distance. The blink of the eye, the intake of breath, the flare of the nostrils, and other facial expressions can communicate in ways more than words, and make the audience more rooted and invested in the characters and the film as a whole. Try to notice the majority of American films who do this.  Ok. That’s it. That’s my review.  Oh, one last thing. Another unpopular opinion: For a perfectly cemented plot and a truly realistic portrayal of Ethan and Joy’s relationship, there should’ve been a bed scene toward the end.

I think it’s safe to say a sequel should be forthcoming. And it’s non-negotiable. (Please?) Rating: 5 out of 5 Stars  5/5 Want to read my recent Movie Reviews? Click HERE and HERE.