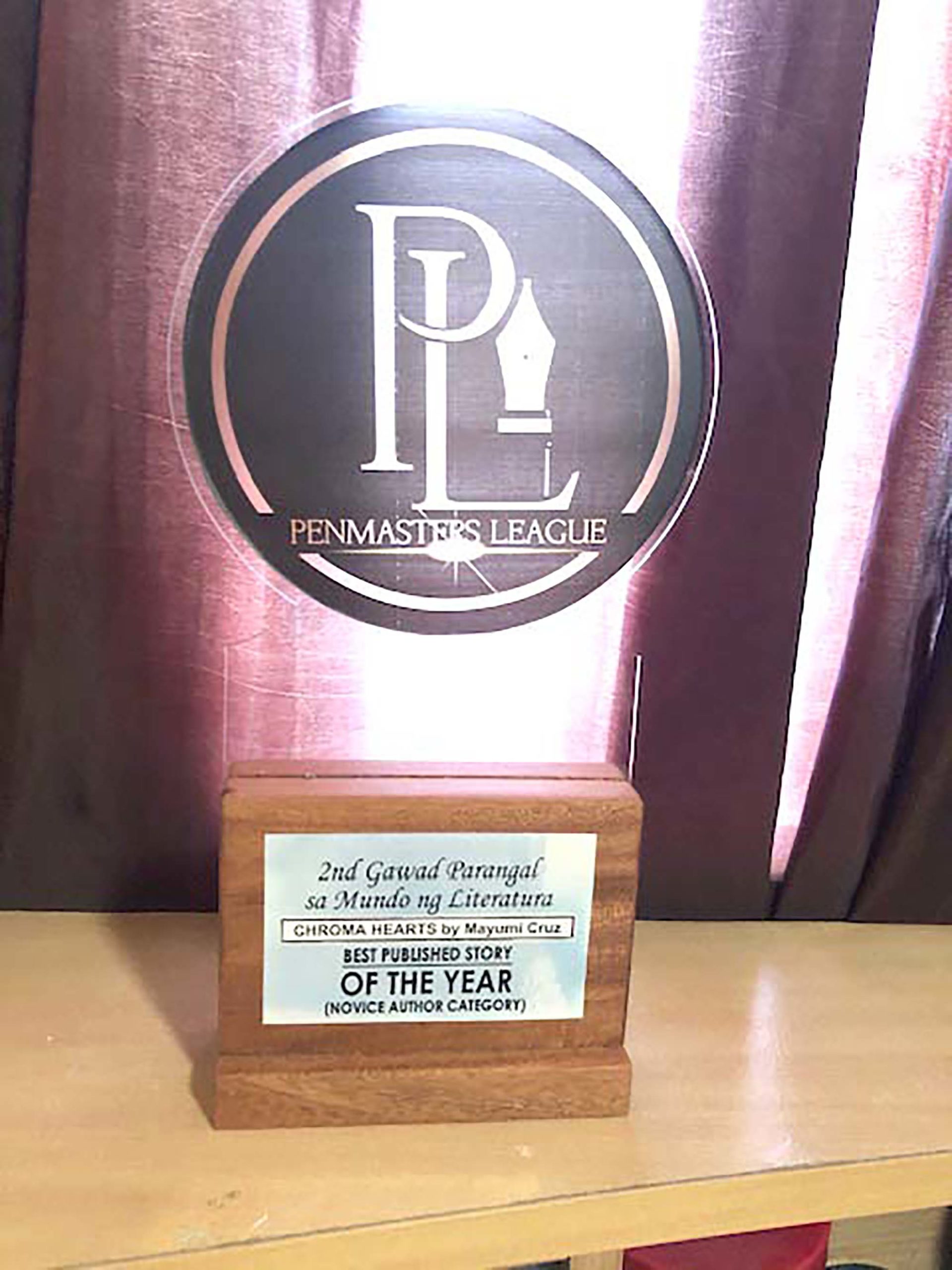 Allow me to have a moment: a trophy moment. Five years into writing, and I have an award-winning book!

When I embarked on a career change (writing fiction), I never expected anything. I just wanted to write my stories, the plots and characters which keep whirling inside my mind, writing them in such a way that pleases and gratifies my near-perfectionist criteria of what a good story should be.

So it’s a pleasant surprise to be recognized for my writing. More than a surprise, it’s a great honor.

CHROMA HEARTS, my romantic psychological thriller, was awarded 2019 Best Published Story (Novice category) by Penmasters’ League, a community of publishers, authors and aspiring writers here in the Philippines. I was also voted 3rd Best Published Author of the year.

When I received their email last year telling me that I’m one of the nominees for Best Published Story and Best Novice Author, I couldn’t believe it. I’m not a very sociable writer because managing my household takes up most of my time, preventing me from attending most writer events and the like. I make do with self-promoting my books and writing my stories to the best of my ability. It was a nice surprise to be included in a short list of nominees, and more than that, to be welcomed with open arms into a group of established authors.

I didn’t get to accept this trophy in person last February because, you guessed it, I wasn’t able to attend the event. And then, the pandemic happened. It was so kind of Ms. Emerald Blake and Ms Elaine Ruiz of PressStart Studio to send me this trophy. (Good thing there’s Grab, too 😁) My thanks goes to them from the bottom of my heart.

Most gratefully, I give praise to my God without whom this would not have been possible. 🙏

As a token of appreciation, here’s an excerpt from Chroma Hearts. Enjoy, and please buy the book!

The appalling realization of what the speaker of the voice was going to do after killing me propelled me to summon all my willpower and energy to force my muscles to move, despite the slow dissipation of the drug’s effect. It should wear off by now. It must have been ten minutes already.

Concentrating hard, I willed my fingers to clench. They budged, if only for an inch. Spurred by my small victory, I focused on my left arm. Lift. Lift, damn it!

It did. But my joy was short-lived.

The needle was injected into the medication administration port. Any second now, the person who wanted me dead will push the plunger to deliver the SUX directly into my system.

A rush of adrenaline energized me. Driven by the fear of death and the subsequent terror that will come after, I mustered enough muscle strength to lift off my body’s entire left side from the bed, flipping it over to my right. The full weight of my numbed left arm descended heavily on the hand holding the syringe. The needle broke. The syringe flung away. It catapulted in the air, crashing on the floor on the other side of the bed. It instantly shattered, its contents spilling freely.

An ear-splitting animalistic scream, a mixture of anguish and anger, filled the room.

But the owner of the voice was quick to recover. Possessing incredible strength, I was pushed down back on the bed, straddling me, pinning me down. With a snarl, a pillow was quickly laid over my head. The oxygen mask drilled a hole on my cheeks, smothering my nostrils, denying me of precious air.

I wanted to flail my arms but couldn’t. I was crushed down with a death grip. All I was able to do was flap them stiffly up and down, like the seals in a famous sea lion show. I felt my breathing restricted more and more at each passing minute, as my nose and throat were stuffed with the fullness of the pillow.

Suddenly, miraculously, I felt my lower body fully relax from the paralyzing effect of the low-dosed drug initially injected on me. My muscles unknotted and loosened up. Quickly, I brought up both my still weak legs and smashed my knees back as forcefully as I can. They hit the back of the person strangling me, causing the pillow to be lifted slightly from my face as my attacker grunted in pain.

Swallowing quickly a pocketful of air, I pushed the pillow forcibly away from me in an upward motion. The pillow smacked straight to my attacker’s face. Surprised and out of balance, the person toppled over. Dimly, I glimpsed flailing legs.

Seizing the moment, I compelled my entire body, now in full working condition, to roll out of the bed to the left, removing the oxygen mask from my face and the IV from my arm. But just as I was throwing my leg over the side of the bed, something solid and hard hit the back of my head. My vision went momentarily dark again as I sank to the mattress, flat on my chest. My breath was completely sucked out of me. Touching my nape, my hand felt the sticky, gooey texture of my blood. Groggily, I watched as the portable oxygen tank tumble down on the floor. It must have cracked my skull open.

Before I can move, I was mounted from behind, crushing down my spine to the bed. Something thick and rubbery looped around my neck, then pulled back harshly and tightly from my back. Vaguely, I realized what it was. The tubing of my sphygmomanometer which I used to periodically check blood pressure.

I gasped for air. My head felt like it was about to explode. Desperately, I struggled to hook my bloodied fingers under the tubing to lift it up from its terrifying grip on my neck. Two of my fingers succeeded in doing so, allowing me a minuscule amount of air. I sputtered, my tongue protruding, my breath coming in harsh rasps.

But I knew my joy was brief. The tubing pressed down on my jugular vein, preventing blood to circulate back to my brain. I would be unconscious shortly. Already, my vision was dimming. My brain was lacking oxygen. I was hallucinating, feeling that the tubing’s grip was loosening. A distant scream pierced my ears. Was that mine?

But I was past caring.

Oblivion claimed me, at last.

CHROMA HEARTS is available on Amazon. For Philippine buyers, there’s a paperback edition which can be purchased directly from me.

Besides blogging, I also write books.  Twists and turns, mayhem and mystery, kisses and angst, laughter and tears make up most of my stories. Browse them HERE.
Previous
Next
Trophy Moment