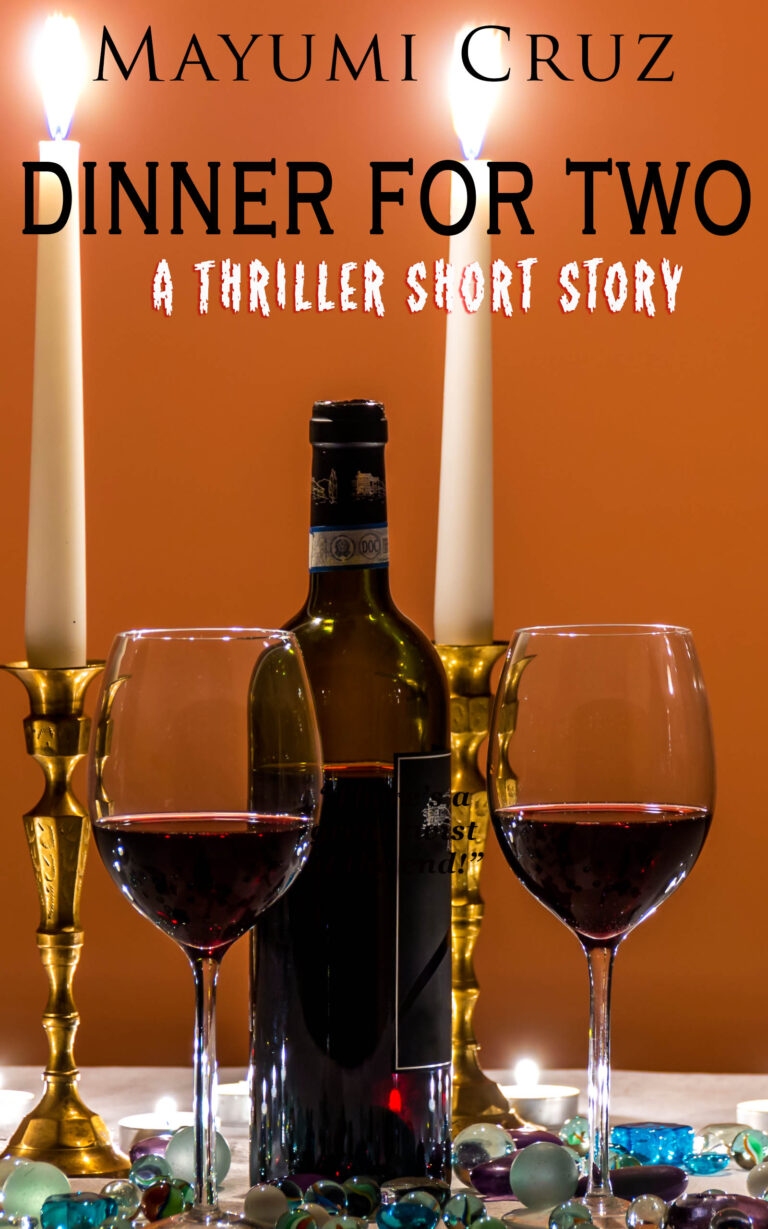  5/5
"HIGHLY RECOMMENDED. My first book by the author that I thoroughly enjoyed. In such a short story Mayumi Cruz managed to turn a romantic dinner into a crime without us even suspecting it. A very enjoyable work highly recommended. I'll look forward to reading a lot more books by the author.
~ Angela Goodreads reviewer
 4/5
"NICE QUICK THRILLER. I picked up this book to diversify my reading tastes with a nice thriller, and this short story intrigued me. It was a really quick read with a good ending. I feel that I can't say much since it's so short, it would give the whole story away. If you are looking for a nice quick thriller, I would recommend this! Though I would warn you: careful with this if you're squeamish!"
~ Grace Kathleen Amazon/Goodreads reviewer

Tom and Bea are celebrating their tenth wedding anniversary. It was a sort of a celebration after Tom’s kidnapping ordeal in the hands of an insane woman, Cleo, which almost destroyed their marriage. Bea, famously known in the food industry as the fairy chef, concocted a special three-course meal, plus a delectable dessert for Tom . . . to die for.

When love borders in insanity, the consequences are deadly.

It was the most sumptuous dinner she had ever cooked for him.

After all, it was their tenth wedding anniversary, she said. She wanted everything to be extra special.

Putting out their elegant chinaware and silverware, fine linen and silver-coated candlelight sticks, she meticulously prepared a lavish table setting for a three-course delectable meal she prepared just for the two of them.

It was a good thing he brought her favorite brand of red wine, imported from Italy. Red wine is the best accompaniment to red meat, she told him. Their anniversary dinner was made all the more perfect with the inclusion of the expensive liquor.

Appreciating her efforts, he ate with gusto, relishing every morsel. And indeed, it was the best meal he had eaten in a very long time. Trying hard not to burp out loud, he can feel how full and satisfied his stomach was.

“Happy anniversary, darling,” she muttered, as she dropped a kiss on his mouth, before settling in beside him on the living room couch in front of the fireplace, after pouring wine to their glasses.

“Happy anniversary too,” he whispered back, his right hand gently wiping away minuscule black and red particles of what looked like sticky dirt on her shoulder and on her arms. “Must have been the spices she mixed in with the meals,” he thought.

“Tom, are you happy?” she asked him suddenly, her eyes staring fixedly at him.

“Of course I am,” he answered, smiling at her.

“Really?” She looked at him with her blue puppy dog eyes. Even though she was fifteen years his senior, she sometimes acted younger than her age.

“Yes, my love. I’m happy that we’re together again, despite what happened.”

“I’m also glad it’s over. Oh, Tom, I shudder at the thought of what she could have done to you! I was in hell for the last three months, not knowing where you are and the suffering you must have went through.”

Eagerly, he held both her hands, looking straight into her gaze as a tear fell down her cheek.

“Bea, let’s stop bringing up the past and just move on with our life. Cleo’s obsession with me is finally over.”

“But she drugged you, abducted you and took you against your will, hiring goons to tie you up and bring you to wherever she wanted! Then she threatened to kill herself if you leave her, even when you were begging her to let you go. She held you captive in a cabin in the Alps. It was only when she went to town to buy some groceries that you were able to escape! She’s a very bad person, Tom.”

“Uhm, yes. Or maybe just a little bit insanely in love with me?” He smirked.

The first Five Chapters of THE BILLIONAIRE'S WIDOW is available to my subscribers.

SIGN UP for my Newsletter to get it for FREE!